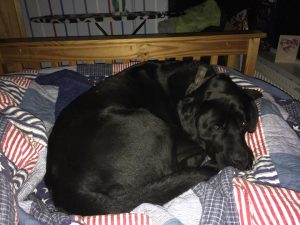 Kenya the black Labrador dog who was shot dead

THE PSNI are investigating after a pet dog was shot dead.

The black Labrador, named Kenya, was attacked in the Cotton Road area of Bangor, Co Down yesterday.

It is understood the dog’s owners initially believed the animal had been hit by a car and only realised it had been shot when they went to the vet.

Police say they are following a definite line of inquiry.

A man in his 50s presented himself to a police station this evening voluntarily to be questioned about the incident.

Peter Weir, DUP MLA for North Down, described the attack as appalling.

He said: “I am shocked and disgusted at news of the deliberate shooting of a black Labrador family pet in North Down which has sadly led to the death of the dog.

“The owner of Kenya initially thought that his pet had been the victim of a road traffic accident, but it soon became clear that the injury was a result of a gunshot wound.

“Despite the best efforts of a local vet, the dog was unable to be saved.”

The Police Service of Northern Ireland (PSNI) said officers were following a definite line of inquiry.

Constable Stuart Moore said: “We received a report that a dog had died after being taken to a local vet for treatment for what is believed to have been a gunshot wound.

“We are investigating the circumstances around this and are following a definite line of enquiry at this stage.”

Yesterday, two men were jailed in connection with a savage attack on a Co Antrim family’s pet dog.

At Belfast Crown Court, Andrew Richard Stewart was jailed for 10 months with a further 10 months to be spent on licence after he admitted causing unnecessary suffering to an animal.

Jamie Downey was handed a six-month custodial sentence after he pleaded guilty to perverting the course of justice.

Mr Weir added: “Such cruel behaviour is beyond belief and it is difficult for anyone to understand such evil.

“Yesterday we saw custodial sentences in the brutal slaying of Cody.

“Sadly, the news from Bangor shows that this is not an isolated one-off case.

“Those responsible for the killing of Kenya need to be treated with the same severity and jailed.

“I welcome the police investigation, and call on anyone with any information to come forward, so that the perpetrators can face the full rigours of the law.”