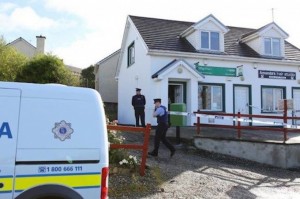 Gardai at the scene of the post office robbery

THREE men in their 20s have been charged with yesterday’s armed robbery of a post office in Co Donegal.

The hold-up  occurred at approximately 10.15 am when three men entered the Manorcunningham post office, armed with a knife, a hammer and a sledge hammer/hatchet.

They threatened staff and caused a considerable amount of damage in the post office.

They left with a sum of money in the direction of Newtowncunningham in a van which had been hijacked earlier in the Nixon’s Corner on the outskirts of Derry.

The van was stopped by Gardai close to the border at the village of Killea and the three men were arrested.

Two are being detained at Letterkenny and one in Buncrana.

The van was seized and is being forensically examined.

The Gardai had been alerted by the PSNI that a Royal Mail postal van had been hijacked by three men a short time earlier and had fled in the direction on Co Donegal.

The three men are to appear at court in Letterkenny District Court tomorrow.