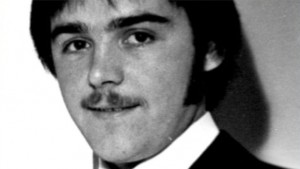 THE remains of IRA Disappeared victim Brendan Megraw are believed to have been uneartheed in a Co Meath bog during a search by the Commission for the Location of Victims’ Remains.

The discovery was made this morning in a drainage ditch at Oristown bog near Kells, by contractors called in to prepare the site for forensic excavations.

The commission had been searching for the remains of Brendan Megraw, one of the Disappeared.

The remains have not yet been formally identified.

Mr Megraw from Twinbrook, Belfast was looking forward to the birth of his first child and was due to start a new job on a ship when he went missing in April 1978 aged 23.

He was one of 17 people abducted, killed and secretly buried by republicans during The Troubles.

The remains of ten of the Disappeared have been recovered so far.

Forensic archaeologists surveyed the remote bogland a month ago and have spent the last few weeks analysing radar surveys, searching for anomalies in the ground.

Separate searches have also taken place on bogland a few miles from the Oristown site, near Wilkinstown, for Kevin McKee and Seamus Wright, both of whom were taken by the IRA in October 1972.

It is also suspected Joseph Lynskey, a former Cistercian monk taken from the Beechmount area of west Belfast in the summer of 1972, was also buried somewhere in the area.

The IRA claimed Mr Megraw had confessed to being a British provocateur and Military Reaction Force undercover agent in 1978.

The ICLVR was established in 1999 after the Good Friday Agreement and is acknowledged as a world leader in the search and recovery of human remains from bogland.

Brendan’s brother Sean Megraw has spoken of his anguish upon hearing of the discovery of Brendan’s body today.

Sean Megraw said that he got a call this morning from Commission Investigator John Hill who “seemed confident” it was Brendan’s body.

Mr Megraw said, after having spoken with Mr Hill, he is certain it is his brother’s body.

“I’m pretty sure it is ’cause he had a bit of a talk about what he was wearing and things like that, so, he seemed fairly confident.

“They don’t normally give you false hope, so it extinguishes any little hope that he could be alive but, well, we more or less suspected since 1999, when we were told that he had been killed.

“So that’s 15 years now. It’s been a long and difficult period for us all, like,” Mr Megraw added.