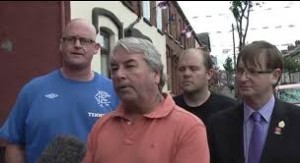 EXCLUSIVE: THERE were fresh tensions inside the UDA’s fractured north Belfast brigade this evening.

PSNI Tactical Support Group officers were diverted from a loyalist protest at Twaddell to the Tiger’s Bay area.

It followed reports that supporters loyal to banged up UDA brigadier John Bunting tried to force a number of rival loyalists out of their homes.

One of those the mainstream UDA tried but failed to force out of his home was ‘Big’ Bill Hill.

He became prominent during the loyalist Union Jack flag protest.

Security sources said that the PSNI launched its ‘India 99′ helicopter to provide aerial support to TSG officers on the ground.

Bunting and Howcroft and a third man were further charged with possession of a firearm.

Three men were charged with attempted murder and possession of a firearm, following the shooting of a man in north Belfast earlier this week.

In one incident, a rival faction threw a pipe bomb at John Bunting’s parked up car in north Belfast.

There then followed a spate of arson attacks on homes and cars as tensions mounted.