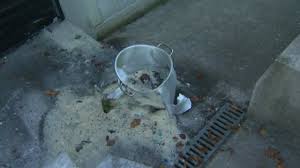 The remains of the saucepan bomb at Orange Hall

DISSIDENT republicans have claimed responsibility for a device that partially exploded outside an Orange hall last week.

A group calling itself ‘The Irish Volunteers’, admitted planting the device at Carnagh Orange Hall in Keady, Co Armagh last Friday in a phonecall to the Belfast daily newspaper, The Irish News.

In a phone call to the Irish News, a group calling itself The Irish Volunteers admitted it placed the device at Carnagh Orange hall in Keady.

The security operation around the Orange Hall has now ended after a partially exploded device had been taken away for examination.

A saucepan, thought to contain homemade explosive material, was left at the door of the Orange hall on the Castleblaney Road.

A shutter was damaged when the device partially exploded at the hall.

PSNI Ch Insp Ian Campbell said: “We are in contact with members of the lodge and local representatives in relation to this incident.

“The reality of policing in Northern Ireland is that there is a significant ongoing threat from terrorists who have shown they are determined to kill police officers.

“As a consequence, our response to each incident is guided by what best protects both the public and our police officers, and causes least disruption to the community.”

Orange Order Grand Master Edward Stevenson condemned what he called the “moronic actions of those behind the bomb attack at Carnagh Orange hall”.

The attack has brought widespread condemnation from both unionist and republican politicians.