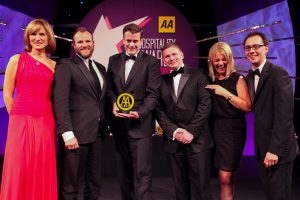 This time it has been named the recipient of the first ever AA Spirit Award at the prestigious AA Hospitality Awards.

Held at the Grosvenor House in Mayfair, London on Monday 22nd September, the AA Awards recognise outstanding excellence in hospitality.

The AA Spirit Award, sponsored by famous single malt Scotch whisky brand, The Balvanie, was introduced for the first time this year.

The highly coveted title was awarded to The Merchant Hotel, which was deemed by the judges to be a “hospitality business that really champions spirits through its product offerings and service, promotes customer awareness and knowledge and is passionate about both pre-dinner and after dinner guest experiences.”

“We are thrilled and honoured to be named the first recipients of the prestigious AA Spirit Award.

“We pride ourselves on the excellence of our product offering and service; our dedicated mixologists and bar teams have curated an enviable collection of quality and often rare, coveted spirits from across the world and are committed to passing on their knowledge and passion to our customers.”

“We are proud of the role that The Merchant has played in the development of Belfast’s hospitality scene and we will continue to strive for excellence, offering five-star service and facilities to visitors and residents alike.”

Attended by world-renowned chefs, prominent hoteliers, hospitality gurus and key industry media, the AA Hospitality Awards are amongst the most prestigious national awards of their kind – widely regarded as the Oscars for the hospitality industry, they draw on the unrivalled knowledge and expertise of the AA inspectorate and other industry professionals involved in the judging process.

Winners are selected in recognition of excellence and success within their chosen category, having shown a significant improvement in the preceding 12 – 18 months and proving their dedication to raising industry standards and enhancing both their guest and diner experiences.

From top hotels and restaurants to the best of British pubs, the AA Hospitality Awards celebrate everything that is great in British hospitality. All the winners will appear in the latest edition of the 2015 AA Hotel, Restaurant and Pub Guides which were launched at the event.

Guests at the awards ceremony, hosted by Fiona Bruce, were treated to a sensational gourmet meal created by2013 AA Chefs’ Chef, Tom Kerridge as well as entertainment from Britain’s Got Talent semi-finalists Light Balance.

The Merchant Hotel is owned by the Beannchor Group, which boasts a portfolio of over 50 pubs, hotels and restaurants across Northern Ireland.