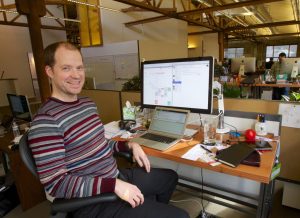 US software company Puppet Labs is creating 100 jobs in Belfast.

The firm is setting up an engineering centre in the city with Invest Ni pumping in £1 million in grants to secure the jobs.

The company works in the field of development operations, which involves creating software that allows IT system administrators to automate tasks.

Puppet Labs software is used by firms like eBay, Bank of America and Cisco to configure and manage their IT infrastructure.

Recruitment is already underway and the jobs are expected to be filled over the next three years.

They will pay total annual salaries of £3.7 million.

The firm employs 320 people worldwide, mostly at its HQ in Oregon.

The company was founded by Luke Kanies. He said: “Puppet Labs has been growing rapidly, as IT automation is critical for any company that uses technology to compete.

“This new centre will expand our engineering capacity to support our plans for growth, particularly in the European and Middle Eastern markets.

She described the firm’s investment as “a further boost to our already strong ICT sector, which is playing a significant role in growing the local economy”.