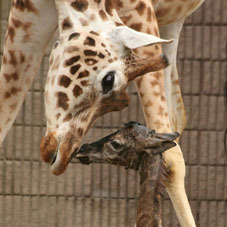 BELFAST Zoo has finally revealed the sex of the baby giraffe born in front of shocked visitors is a girl.

The calf has been named Ballymena and she will be called Mena for short.

Her mum Neja gave birth to the Rothschild’s giraffe on Monday, September 1. Rothschild’s are one of the most endangered species in the world.

Zookeepers gave the pair time to bond before finding an opportunity to confirm the sex.

The zoo planned to call the calf Ballyrory if it was a boy.

Zoo curator Alyn Cairns said Belfast Zoo had a long held tradition to name any new giraffes borns after places Northern Ireland that begin with Bally’ which means place of.

“The keepers, who care for the giraffes, have been thinking of names throughout Neja’s pregnancy and have selected Ballymena,” he said.

Keepers first discovered Neja, and father Finn, were going to have a baby in 2013.

Belfast Zoo first became home to giraffes in 1988 and since then 33 calves have been born at the Cave Hill site.