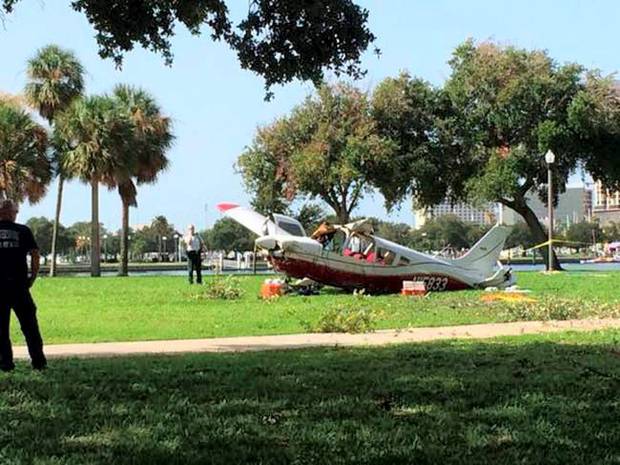 TWO men from Northern Ireland are seriously ill but stable in hospital after the single engine plane and crashed into a public park in Florida.

They have been named as Grant Jordan, 57, who was the pilot, and Aloysius Ryan, 52., the co-pilot.

The pair are members of the Ulster Flying Club in Newtownards, Co Down.

A third man, Eamon Harnell, 48, and a teenage girl, also from the Republic, walked out of the aircraft with minor injuries.

People enjoying the quiet of the waterside park in St Petersburg dived for cover as the 42-year-old Piper Cherokee plan was hurtling straight for them.

It narrowly missed hitting an apartment block, with one of the wings ripping off as it hit a tree before crash landing near water.

No one on the ground was injured in the incident on Monday morning.

Eamon Harnell and the 17-year-old girl were able to walk from the crashed plane.

The pilot was taken from unconscious the plane by paramedics limp however, locals say he later woke up on the stretcher but was unable to say who he was, where he had come from or why he had been flying to St Petersburg.

He and Ryan remain in the Baymont Health hospital in St Petersburg. The other two were treated for minor injuries.

The plane had left Tallahassee Regional Airport at 8.14am and was scheduled to land at another Florida airport.

It was registered to a company from Gretna, La, called Advanced Technology Training.