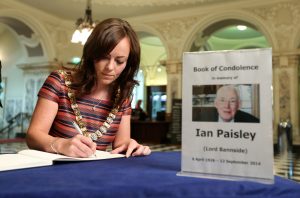 THE funeral of former First Minister and DUP leader Ian Paisley is to take place today.

The 88-year-old will be buried at the family plot in Co Down, following a private funeral service at his family home in east Belfast.

He died suddenly on Friday.

As a mark of respect, tributes will be paid by MLAs in the Northern Ireland Assembly at noon all Assembly business will be suspended.

MLAs will also sign a book of condolence in the Great Hall.

A book of condolence was open this morning at Belfast City Hall and first sign it was SDLP Lord Mayor  Nicola Mallon.

Several were opened in towns and cities in Northern Ireland on Saturday, including in Derry’s Guildhall where Martin McGuinness signed it saying he had lost a “true friend”.

Also as a mark of respect, all DUP constituency offices will be closed on Monday.

Mr Paisley was forced out as leader of his party, as First Minister and as moderator of the Free Presbyterian Church over his cosy relationship with Martin McGuinness. 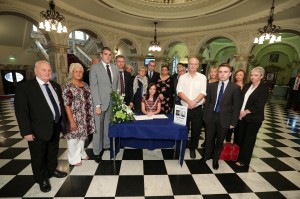 Hardliners in the party and church did not like the ‘Chuckle Brother’s’ image of the laughing and joking.

A State funeral had been planned by civil servants at Stormont.

But because of the internal party disputes, he decided that his funeral would be private with only his family attending.

A memorial service is planned for later in the year.