ULSTER RUGBY SUMMER CAMPS ARE THE MOST SUCCESSFUL YET 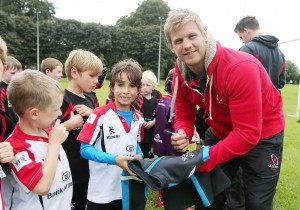 THIS year’s Ulster Rugby Summer Camps, sponsored by independent retail group Centra, have proven to be a big hit across the Province, with greater numbers than ever before taking part to learn and hone their rugby skills.

With the added incentive of getting an opportunity to meet some of Ulster Rugby’s biggest stars during their weekly visits, young participants have flocked to the 23 venues province-wide to be part of the action.

This year’s figures will show that more than 1,800 participants took part in the week-long Summer Camps over the course of the summer, a 15% increase on last year.

For local children the highlight of each five-day camp was the attendance of Ulster Rugby players, who shared their experience as professional sportsmen and presented one young person with a certificate for the most improved skills.

All participants also received a boot bag, T-shirt, rugby ball and a voucher to claim a free ticket to an Ulster game at Kingspan Stadium.

The programme once again included 18 Junior Camps, one Senior Camp, two Girls Camps and two special needs camps, which had more than double the participants from last year.

Barry Willis, Community Rugby Manager at Ulster Rugby said: “The camps have yet again proved to be a remarkable success. The Ulster Rugby senior team is becoming more and more popular and it is great to see this reflected in the number of young people attending camps.

“The camps provide opportunities for boys and girls of all abilities to improve their rugby skills and allow us to develop stars of the future. We are indebted to Centra for its continued support and to our host venues for enabling the camps to run so smoothly.”

Nikki McDowell, Centra Brand Manager, said: “This is the sixth year that Centra and its independent retail partners across Northern Ireland have supported Ulster Rugby Summer Camps, and we are very proud of this association.

“The camps have proven more popular than ever before, with thousands of children taking the opportunity to learn from the Ulster Rugby stars and try rugby for the first time or develop their skills before starting back to school,” Nikki added.