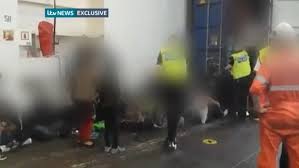 A Northern Ireland man is due in court this morning charged over the death of a Sikh father in a shipping container.

Martin McGlinchey, of Derryloughan Road, Coalisland, Dungannon, in Co Tyrone will appear before magistrates in Basildon.

The 47-year-old has been charged with conspiring to facilitate illegal entry into the UK.

Mr McGlinchey will be taken from a police station to his first remand hearing in front of magistrates.

He is expected to be remanded in custody as police investigations continue.