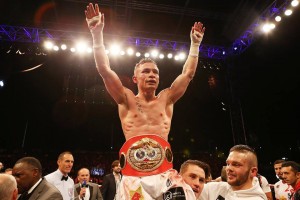 THE people of Belfast are being invited to honour the city’s first World boxing champion for almost 20 years.

But boxing fans are not happy at the short notice of the event to honour Carl Frampton.

And they are furious there is no open top bus tour of the city centre so fans can cheer him on.

Lord Mayor Nichola Mallon will host an official reception for Carl ‘The Jackal’ Frampton to mark his victory over Kiko Martinez on Saturday night. It will take place at the front of City Hall tomorrow (Tuesday) at 1pm.

The new IBF super-bantamweight champion will be joined on the stage by his family and his manager, former World champion Barry McGuigan, whose Cyclone Promotions staged the ‘Titanic Showdown’.

“We’re staging this reception at lunchtime to allow as many people as possible to come to the City Hall and show Carl just how proud everyone in Belfast is of what he has achieved,” commented the Lord Mayor.

“Celebrating the best of Belfast has been the theme throughout my term in office – and this will be a celebration our city will revel in,” she added.