NIGHT OF THE JACKAL AS FRAMPTON NEW WORLD BOXING CHAMPION 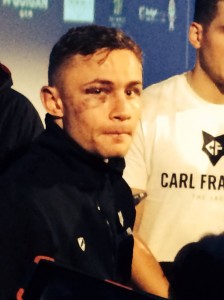 Now ‘The Jackal’ wants to take on Scott Quigg in his next fight any time, any place, anywhere.

Spurred on by a roaring 16,000 crowd in Belfast’s Titantic Square, Frampton dominated the contest from start to finish as he claimed a one-sided verdict on the cards of all three judges.

Frampton paid tribute to his opponent afterwards, stating: “He (Martinez) was so dangerous, he’s a hard puncher and a tough man. I’ve never respected a fighter more in my life.”

With a ninth-round stoppage of Martinez in February 2013 already on his record, Frampton started the contest as a clear favourite and soon began to justify that position after a cagey opening round.

Boxing on the move, the ‘Jackal’ picked off his opponent with much the cleaner and more accurate work with a sharp combination and chopping right forcing his Spanish rival back in the second.

Martinez continued to come forward, but struggled to tag Frampton who boxed well behind his jab and had much the better of the first four rounds.

The challenger then put his rival on the canvas with a short counter-right to the side of the head towards the end of the fifth with a groggy Martinez clearly relieved to hear the bell.

But the Spaniard regrouped well and produced his best rounds of the night in the seventh and eighth with his sheer work-rate and aggression unsettling Frampton in close for the first time.

But Frampton responded well, moving to keep his opponent at range before unleashing a crisp straight right in the tenth and then a punishing flurry at the end of the 11th, returning to his stool with one arm aloft.

He threatened to finish things in style as he trapped Martinez on the ropes in the last, firing a barrage of big shots at the Spaniard but, while he survived to hear the final bell, the outcome was never in doubt.