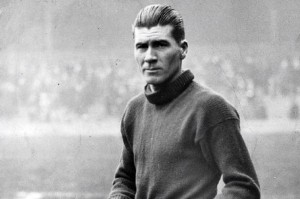 He is one of only a few footballers from Northern Ireland who ever pulled on the red shirt at Anfield after he was signed by manager Tom Watson.

Everton FC were also in the hunt but decided that at 19, Elish Scott was too young.

Born on August 24, 1893, at  6 Bismark Terrace, Moltke Street, off the Donegall Road, Elisha Scott played for Broadway United, who were the local Irish Junior Cup winners.

He also played for the 4th B.B. Company.

On New Year’s Day 1913, he made his debut for Liverpool and returned home to play for Belfast Celtic, and from 1936 as their manager.

In fact, it was his older brother Billy who had recommended Elisha to Liverpool manager Tom Watson.