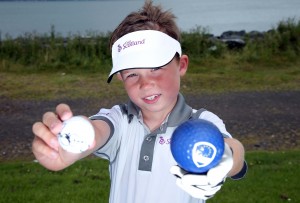 A young up-and-coming Northern Ireland golfing star, Thompson Gedge (7) from Bangor, Co Down, is pictured as he tees up for The 2014 Ryder Cup.

It follows the announcement that his local heroes Rory McIlroy and Graeme McDowell are set to represent Team Europe later this month.

Award-winning Thompson, who has been heralded as the ‘next Rory McIlroy’, recently returned from Scotland where he successfully competed with America’s best young golfers in the USA Kids Golf European Championship 2014.

With practice day tickets still available for The 2014 Ryder Cup at Gleneagles, VisitScotland is encouraging Northern Ireland golf enthusiasts to follow in Thompson’s footsteps and experience one of the home of golf’s 550 courses.

The Ryder Cup and Home of Golf are only a short flight or ferry away.

Additional easy access routes from Northern Ireland to Scotland include short ferry trips from Belfast to Cairnryan and Larne to Troon and Cairnryan..For more information on Scotland’s famed greens and fairways, go to www.visitscotland.com/golf.