DISSIDENT LEADER HITS OUT AT MCGUINNESS’S CALL FOR ‘DIALOGUE’ 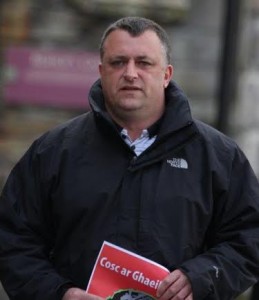 A call by Deputy First Minister for dissident republican paramilitaries to declare a ceasefire has been criticised by Gary Donnelly, a leading member of the 32 County Sovereignty Movement.

Mr McGuinness called on dissident republicans to enter politics and get involved in dialogue while speaking at an event held in Derry yesterday to mark the 20th anniversary of the IRA ceasefire.

However, Mr Donnelly, who was elected on to the newly formed Derry Strabane District Council as an Independent earlier this year, said while could not speak on behalf of armed groups he did not think Mr McGuinness would be listened to.

Speaking on BBC Radio Foyle, Mr Donnelly said: “I would doubt it very much. I would be very, very sceptical.

“To sort out the age old conflict in Ireland, then the issues which brought about that conflict, which is the violation of Irish sovereignty, has to be dealt with.

“And unless these armed groups are interested in selling their soul and getting a chance to meet and greet presidents, Queens and Israeli ambassadors, then by all means.