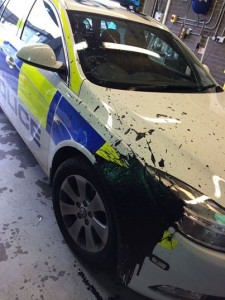 THE PSNI say officers had a lucky escape last night when their patrol car was attacked by up to ten masked men during a bogus call out.

The gang threw bricks and paint at them when they responded to a call for assistance in Moygashel.

“After their vehicle was struck, officers quickly withdrew from the area. It was later established that the initial call for assistance had been a hoax,’ said a spokesman.

“If anyone has any information about the incident, please contact us on 101, or anonymously via Crimestoppers on 0800 555 111.”