FUNERAL HELD FOR THE LEGEND THAT WAS GERRY ANDERSON 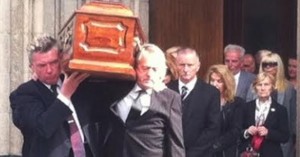 OVER 1,000 people have attended the funeral today of television and radio presenter Gerry Anderson.

St Eugene’s Cathedral in Derry was packed to capacity for Requiem Mass during which the 69-year-old, who died on Thursday last after a long illness, was described as an “enormous and unique” talent.

Mourners had begun gathering at the church up to 90 minutes before the service.

Some of the biggest names in Northern Irish broadcasting attended as well as many of Gerry’s colleagues from BBC Radio Foyle and BBC Northern Ireland.

Speaking to Derry Daily after the service, Eamon Holmes described Gerry as a “legend.”

He added: “He was a character. He was someone who kept listeners and viewers on the edge.”

Speaking during the service, Fr Paul Farren said Gerry was a private person who was happiest when he was at home surrounded by his family.

Fr Farren added: “He was a famous man, unaffected by fame.”

Two of Gerry’s favourite artistes, local jazz legend, Gay McIntyre, whose band Gerry had been a member of as a teenager, and Sean Donnelly, under the musical director of Frank Gallagher, performed during the service.

Gerry was laid to rest in the City Cemetery immediately after the service.