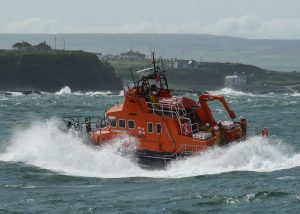 TRAGEDY was averted after five men were rescued after getting into difficulties on Lough Neagh in the early hours of this morning.

The men, who are from Co Armagh, made contact with the emergency services shortly before 4 am after getting lost while sailing across the lough.

A PSNI police spotter plane based at RAF Aldergrove located their position using an infra-red camera.

Police officers were able to guide RNLI lifeboats and a HM Coastguard boat to their position.

As a result, the men were found unhurt in Antrim Bay and were towed to shore at Ballyginniff.

A Coastguard spokesman said: “They had been lost for some time.

“The lough at night is very difficult to navigate. There are no obvious landmarks.”

The Coastguard have advised anyone sailing out on the lough should to bring navigation equipment.