BOOK OF CONDOLENCE OPENS FOR THE LEGEND THAT WAS GERRY ANDERSON 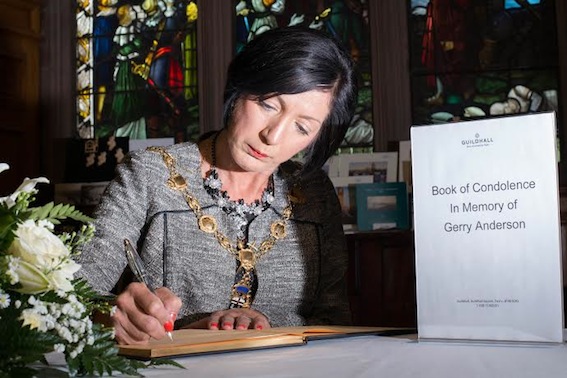 The Mayor Councillor Brenda Stevenson signs a Book of Condolence in memory of broadcaster Gerry Anderson in the Guildhall in his home city. Picture Martin McKeown.

A book of condolence has been opened in Derry in memory of renowned local BBC television broadcaster, Gerry Anderson, who on Wednesday after a long illness.

The book was opened today in the city’s Guildhall by Mayor Cllr Brenda Stevenson who encouraged members of the public to express their sympathy to the 69-year-old.

The Mayor of Derry, Councillor Brenda Stevenson, will open a book of condolence today at Derry’s Guildhall in memory of the renowned local BBC broadcaster Gerry Anderson, who passed away yesterday after a long illness.

Paying tribute, Cllr Stevenson said news of his death had been met with shock and sadness throughout the city and beyond, as family, friends, colleagues, and fans, touched by his humour and warmth contributed to a flood of tributes both on social media and the airwaves.

Cllr Stevenson added: “It is only fitting that a book of condolence should be opened in Gerry’s memory as he was undoubtedly one of the best loved sons of this city.

“Gerry Anderson made people from across the region and beyond laugh every day he was on air, and he will long be remembered for his warmth and wit.

“He leaves a legacy of laughter in his wake.

“I know that the people of Derry will want to express their deepest sympathies with Gerry’s wife Christine and his family, as we all share some of their sadness at the loss of such an exceptional man.”

The book of condolence will be available to sign from 9.00am to 5.00pm over the coming days.

Gerry’s funeral will take place in St Eugene’s Cathedral at 11.00am on Sunday.