FUNERAL THIS WEEKEND FOR THE LEGEND THAT WAS GERRY ANDERSON 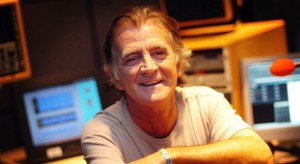 THE funeral of BBC television and radio presenter Gerry Anderson will take place this Sunday, August 24.

Tributes have been paid to the Derry man from across the world following the announcement of his death yesterday after a long illness. He was 69.

In a statement, his wife, Christine, and his son and daughter, David and Kirsty, have paid tribute to a “loving husband, father and grandfather.”

Speaking on behalf of the family, Christine said Gerry was a “very private man” away from his professional life and they wished to respect that.

She added: “We would ask people to respect our privacy in the coming days. For that reason, we will be keeping our home private.

“However, I understand that people want to show their love and appreciation for Gerry in a public way.

“One way of doing this would be to attend Gerry’s funeral at St Eugene’s Cathedral on Sunday morning (11.00am).”

She added: “Another way might be to make a donation to the Foyle Hospice in lieu of flowers.”

Christine said they had been “overwhelmed with the love expressed for Gerry, even in the few short hours since he passed away.”

She added: “I always knew that Gerry was hugely popular. His humour, intellect, creativity and talent made him a great broadcaster and author. The great outpouring of grief today showed us how much he touched the hearts and lives of all who knew him and who followed him.”

Christine described the award-winning presenter as the “most courageous and best friend” anyone could ever have, she said they were heartbroken by Gerry’s passing.

“We are immensely proud of the courage and dignity with which Gerry dealt with his illness over the past two years. He will always be an inspiration to us all.

“As a family, David, Kirsty and I are heartbroken but we know the prayers, good wishes and love of the public will help sustain us at this terrible time.”