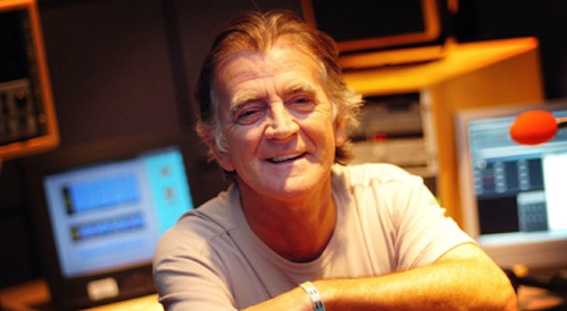 TRIBUTES are being paid to Derry man Gerry Anderson, one of Northern Ireland’s best-known television and radio presenters, who has died aged 69 following a long illness.

Announcing his passing on BBC Radio Foyle this morning, his colleague, Enda McClafferty, described him as a broadcasting “legend” who brought joy to the lives of people here during the “dark days” of the Troubles.

Joe Mahon, former manager at Radio Foyle and presenter of the highly popular UTV series “Lesser Spotted Ulster,” said: “He had a public persona certainly, and that was performance,” Mr Mahon said.

“He put his heart and soul into it, but he also kept an awful lot of himself to himself and to his family.”

Deputy Martin McGuinness said he was “very saddened” to hear of his passing, said his loss to broadcasting will be “very, very deeply felt.”

Former UTV presenter Gerry Kelly, now with Radio Ulster, described him as “one of the most innovative and clever broadcasters” he had ever known.

Gerry Anderson started working as a radio presenter in 1984 and went on to become a household name in Northern Ireland.

He began his broadcasting career with BBC Radio Foyle in his home town, famously renaming it “Stroke City.”

His show was chosen by BBC Radio Ulster and he formed a successful on-air partnership with fellow broadcaster, Séan Coyle, also from Derry.

Anderson also made a number of TV series and documentaries for BBC Northern Ireland, including the chat show “Anderson on the Box” in which he interviewed some of the biggest names from the worlds of entertainment and sport.

He had a brief spell in London as a presenter on BBC Radio Four.

He was named as the Best Regional Presenter at the Royal Television Society journalism awards in 2004.

The following year, he received the ultimate accolade for his services to broadcasting when he was inducted into the “UK Radio Hall of Fame.”

Born in Derry in 1944, he was educated by the Congregation of Christian Brothers after which he worked as an apprentice tool-maker and a clerk in a shipping firm.

In 1963, having taught himself the guitar he moved to Manchester where he worked the clubs.

A tour of Scotland, England and Canada followed, with the showband The Chessmen.

In 1972, whilst in Canada, Anderson joined a band called Ronnie Hawkins and the Hawks.

He then returned to Ireland where he gained a degree in sociology and social anthropology and a postgraduate diploma in continuing education.

He started broadcasting at BBC Radio Foyle in 1985.

His semi-autobiographical, “Surviving Stroke City, was published in 1989, charting his adventures in showband land, his rock ‘n’ roll years in America and his return to Ireland.