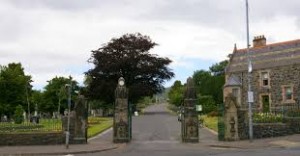 DETECTIVES are investigating after two women were subjected to a terrifying car jacking incident.

During the incident a woman in her 60s was assaulted and her car stolen at the City Cemetery in West Belfast.

The car owner and another woman in her 70s were visiting the City Cemetery on Monday when they were confronted by two men just after 3 pm.

Police say the younger woman was assaulted by the men and her Renault Modus car stolen.

The other woman was left shaken.

However, neither of the pensioners required attention from paramedics.

The Modus car was later found burnt out at Norglen Parade.

Detectives are appealing for anyone with information about the incident to contact them.

One man was described as being approximately 18 to 20 years old, between 5ft 10in and 6ft tall, of slim build with short black hair and stubble.

He was wearing a blue hooded top and grey tracksuit bottoms.

The other man was approximately 18 to 20 years old, about 5ft 10in tall and of medium build. He was wearing a black hooded top.

Anyone with information is asked to asked ring detectives at west Belfast CID on the non-emergency 101 number.