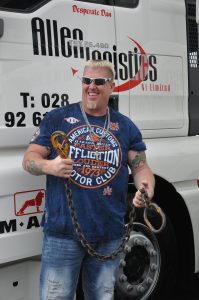 LIZARD lick towing star Ronnie Shirley arrived in Belfast today to prepare for the second Truck Fest, which is to be held at Balmoral Park on the site of the old maze complex near Belfast.

Ronnie a bad boy turned good oversees the day to day operations of his repossession company as well as heading up the repossession skip tracing department.

He is the man that puts the Ron in Ronpos and is in the seat of a truck as a real-life repo man most days and nights of the week.

Known to millions on national television across the world he is also Pastor Of the Eastern Chapter of Dirt Church and an Evangelist by grace.

Ronnie freely admits he was a bad boy back in the day but his following of Christ, has turned his fife around. Ronnie and his crew are at Truckfest in Belfast on Saturday and Sunday see www.truckfest.co.uk for more.

Watch his interview above.