SHOCK AS PLAQUE TO ISRAELI PRESIDENT REMOVED FROM BELFAST HOUSE 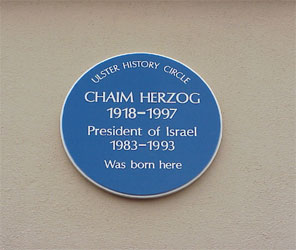 The blue plaque to Chaim Herzog which has been removed

LOYALISTS have reacted with anger after a plaque marking birthplace of an Israeli president has been removed.

The plaque has been taken down from the house at 185 Cliftonpark Avenue in north Belfast which marks the birthplace of Chaim Herzog, a former president of Israel

DUP councillor Brian Kingston said he is “appalled” to hear that the Ulster History Circle blue plaque been removed.

“I have contacted CCRF and am awaiting an explanation of why this has been removed. This is shocking.”

Chaim Herzog was born in 1918 in Belfast, where his father, Dr Isaac Herzog, was rabbi.

While Chaim was still a child, Isaac was appointed Chief Rabbi of Ireland and the family moved to Dublin.

While living there Chaim was a bantam-weight boxing champion!

The family emigrated to Palestine (then under British mandate) in 1935 where Isaac was elected Chief Rabbi in 1936.

Chaim studied law and was called to the English bar in 1942; he also served in the British army during the second world war.

In 1946 he returned to Palestine and was active in the Haganah Jewish underground.

He held a number of positions in the newly created State of Israel in 1948, including Ambassador to the United Nations and culminating in that of President (1983-1993).

He was also a general in the Israeli army, and as Head of Intelligence is generally recognised as one of the chief architects of Israel’s victory in the Six Day War (1967).

He visited both Belfast and Dublin before his death in 1997.

The plaque at 185 Cliftonpark Avenue (off Cliftonville Road) was unveiled on October 20, 1998. 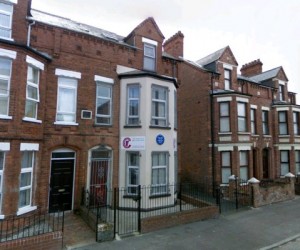