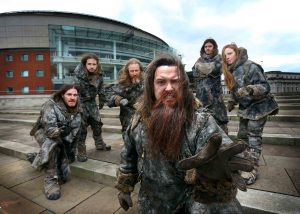 ENVIRONMENT Minister Mark H Durkan has given the green light to plans to extend the film studios in Belfast where part of box office smash Game of Thrones is filmed.

The Department of Environment has given permission to build two new studios and other production facilities.

He said building the studios would “put Belfast on the map as one of Europe’s largest film production locations”.

Since then, Peter Robinson and Martin McGuinness have spread the good news about the the studios to trips to the USA in an effort to bring more film and production business back to east Belfast.

Those behind the Titanic Quarter project have said that the HBO series Game of Thrones is driving up demand for additional space in Belfast.

“These photovoltaic roof-mounted panels convert solar radiation into electricity which reduces costs – a win-win for business and the environment,” he said.

“Developments like this are leading the way in helping Northern Ireland move towards a low carbon economy.”