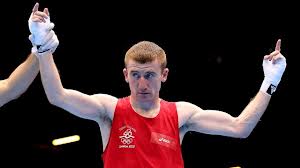 Paddy Barnes, Michael Conlan, Joe Fitzpatrick and Michaela Walsh all made sure of at least silver by securing victories in Glasgow on Friday.

Fitzpatrick sustained another cut on a previous wound under his left eye which could leave vulnerable to a stoppage if it gets badly damaged in his final bout for gold.

The NI boxing team captain was in a different class to teenager Kaggwa and all three judges gave the Belfast man all three rounds.