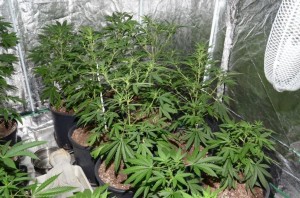 The cannabis factory uncovered by police in Muckamore, Co Antrim

A 36 year old man has been arrested by officers from D District’s Crime Team on suspicion of several drug offences.

It follows the planned search of a house in the Muckamore area of Antrim on the morning of Friday 1 August.

Suspected cannabis plants with an estimated of value of between £13,000 to £15,000 have been seized by police.

Area Commander for Antrim, Chief Inspector Natalie Wilson, said of the drugs find: “Drugs misuse is an issue of concern to all communities.

“This drug search and arrest shows that we continue to work hard to tackle the issue of drug supply and distribution in the Antrim area.

“I am glad to have taken these drugs out of circulation but would continue to encourage the community to work with us to put the issue of drugs on the back foot.

“If you have any information on the illegal sale or use of drugs in your area please call Antrim Police Station on the non-emergency number 101.

“If you would prefer to provide information without giving your details, you can contact the independent charity Crimestoppers and speak to them anonymously on 0800 555 111.”