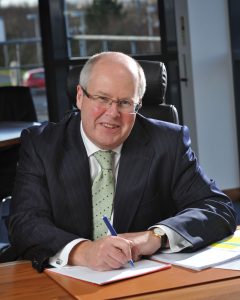 Michael Howard to retire as MD of the SHS group

MICHAEL Howard, the Managing Director of one of Northern Ireland’s largest privately owned companies, has confirmed plans to retire from the SHS Group at the end of the year.

He joined the Belfast-based business almost 20 years ago and, after assuming the role of Managing Director in 1999, helped the Group to evolve from a traditional family-run sales and marketing company into a multinational business with 10 operating companies, 700 staff and an annual turnover of £400m.

Michael played a pivotal role in the company’s acquisition of Merrydown PLC, British Pepper & Spice, Gordons Fine Foods, Brand Phoenix, Bottlegreen and The Crucial Sauce Company. The Group confirmed he would remain in position until December and stay on the Group board as a Non Executive Director following his retirement.

SHS Group was founded in 1975 by Joe Sloan and the late Geoff Salters. Joe Sloan, Chairman of the SHS Group, paid tribute to Michael’s contribution:

“During his tenure as Managing Director, Michael has driven forward significant growth and firmly positioned the company among the elite in the FMCG sector. He has been the architect for the current business model, leading our successful brand acquisition strategy and improving all areas of the Group’s business effectiveness and competitiveness.

“Michael instilled an innovation-focussed culture across all divisions and broadened reach into lucrative markets. He also developed the Belfast centre of excellence, which continues to go from strength-to-strength and underpins the Group’s efficiencies.

“Michael leaves the organisation in exceptional financial standing and with four well-equipped divisions that are ready for future growth and development. On behalf of the Sloan and Salters families, we thank Michael for all his hard work, commitment and support over the past 20 years. I wish him every happiness in his retirement.”

Michael Howard first joined SHS Group in 1995 as Group Financial Director and has helped the organisation grow from an annual turnover of £50m to more than £400m and profits of nearly £20m in 2013.

In 2012, Michael was awarded the Institute of Director’s Lunn’s Award of Excellence for his contribution to the success of SHS Group’s business and employees alongside the wider Northern Ireland community.