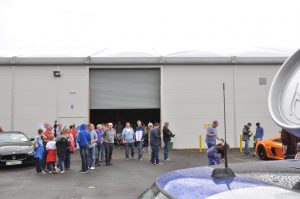 Now they are demanding a refund claiming there was better cars on show in a supermarket carpark!

Car fans flocked to the Kings Hall venue in south Belfast on Saturday and Sunday for the first motor show held in the city in more than a decade.

But they say they were left hugely disappointed as few cars were on show and no dealerships had taken stands at the exhibition.

The organiser’s promotional material had boasted: “For many people the Motor Show was a not be missed event, a chance to see what’s new and what’s available and a must for the motoring enthusiast.’’

However, dozens of people who paid the £10 cash entry fee vented their anger on the 2014 Belfast Motor Show’s Facebook page.

Paul Elliott posted: “I took my son and grandson. It was a pitiful excuse of a motor show.

“That I’m afraid is shameful for the organisers.’’

Mark Hamill described the show as a “joke’’.

He posted: “Where was the new BMW i8, the new Mercedes C Class, Audi R8?

“What has a solar power installer or tanning both got to do with cars.’’

And Paul Louden-Brown drove his E-Type Jaguar 80 miles to display it at the show.

“The impression I had was the car was to be undercover and so I had it valeted.

“It spent the day on display in the showers of rain because the staff said there was no space in the hall!!

“But there was enough space in the hall for solar panels, golf games and fake tanning – it was meant to be a motor show.

“My advice to the organisers is stick to wedding planning and leave car shows to the professionals.

“I am staying at home today to watch the Grand Prix.’’

Belfast Daily’s group travel writer and self confessed petrolhead Tim Hedgley said: “I can only describe it as an absolute shambles.

“It was the worst car show I have ever been too in my life. The highlight was the Noble and E-Type Jaguar cars.

“The rest was just stands with nothing to do with cars. There wasn’t a single dealership on show.

“In fact, it wasn’t even in the main King’s Hall itself. It was in a shed away at the back beside a gravel track which was strewn with nails.

“70 cruising cars were supposed to be there yet only 7 turned up!

“You would see better cars on show at your local supermarket car park.

“I felt totally cheated and I asked for a refund but I was told by one of the organisers: ‘There is no f**king refunds.’ The response said it all,’’ added Mr Hedgley, a trained Bentley chauffeur.

A mobile phone number on its website refused to take incoming calls.