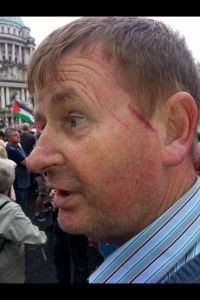 A protest rally was held in support of Palestinians under attack from Israeli Defence Forces.

Unionists and loyalists have long supported the Israeli government.

A source told Belfast Daily: “At one stage there was hand to hand fighting at the City Hall involving those supporting the Palestinians and those backing the Israelis.

“Willie got injured and he has red marks on the side of his face from the attack.”

International leaders have called for an end to the attacks by both Hamas and Israel so as to bring about a ceasefire.


27 Responses to WILLIE FRAZER ATTACKED AT GAZA PROTEST IN BELFAST