SUMMER OF GOLFING IN ‘FULL SWING’ 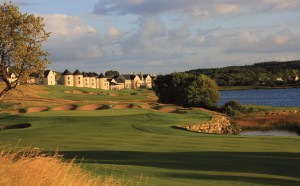 WITH well known NI golfer Graeme McDowell recently winning the French Open, Royal County Down hosting the Irish Open next year and Royal Portrush invited to host the Open Championship in 2019, it’s no wonder that Northern Ireland is known as the golf capital of the world.

Northern Ireland boasts an illustrious golfing heritage with dozens of courses that regularly attract the sport’s best-known stars who come to play world-class courses from the Lough Erne Golf Resort to the famous links courses of Royal Portrush and Royal County Down. Whilst the bigger clubs are firmly in the spotlight, there are also many hidden gems that can be found off the beaten track like Edenmore, Newtownstewart and Tandragee Golf Club.

Northern Ireland is home to some of golf’s biggest names including Rory McIlroy, Graeme McDowell and Darren Clarke, who all started their careers here and the Northern Ireland Tourist Board (NITB) is encouraging golfing enthusiasts to get out to explore and experience not only the world famous clubs but also some of the lesser known golf clubs all around Northern Ireland.

Ruth Burns, Destination PR Unit Manager explains why there is no better time to try out some of NI’s lesser known golf courses:

“The summer golfing season is in full swing and Northern Ireland has a host of golf courses to choose from, many of which are set against a backdrop of stunning scenery. Most people know about the bigger, better known clubs, however many golf enthusiasts will be surprised to learn just how many other great courses are right on their door step. There is also the opportunity to enjoy a number of tournaments including the Down Summer Trophy, the Northern Ireland Open Challenge and Bangor Tourism Week.

“We’re delighted that Royal Portrush has been invited to host a future Major which follows the announcement that the Irish Open is set to return to Northern Ireland next year at Royal County Down and then 2017 at the Lough Erne Resort.

“Northern Ireland’s courses cater for golfers of all abilities and feature some of the most challenging links courses players are likely to encounter, to hidden gems full of character and local history.

“The quality of our courses has produced more than our fair share of world-class golfers and with the competitively priced green fees and great hospitality and craic at the 19th holes, our golf courses really do put us on a par with the rest of the world,” Ruth continued.

Northern Ireland will host a number of tournaments this summer for golfing enthusiasts to look forward to.

The Down Summer Trophy (formerly the Heart of Down Golf Tournament) takes place from August 13 – 15. Limited to 148 players, the tournament is played over three days, on three different golf courses with golfers competing to be crowned the Down Summer Trophy Champion. Day one takes place at Ardglass Golf Club, day two at St Patrick’s Golf Club and day three at the famous Royal County Down Golf Club in Newcastle.

Galgorm Castle Golf Club in Ballymena, Co Antrim, is one of Northern Ireland’s premier parkland courses, and host to the Northern Ireland Open Challenge which takes place from August 28 – 31. After last year’s dramatic finale, which saw promising Dutchman Daan Huizing overcome former Ryder Cup star Oliver Wilson in a play-off, the 2014 edition promises to be another memorable occasion with local golfing star Michael Hoey confirmed to play. This year, the event is free to attend, and promises to be a spectacular occasion for all the family with a designated food village in the grounds of the estate castle plus an interactive golf village behind the 18th.

To give golfers an idea of some of the hidden gems available, NITB has listed some of the courses available across Northern Ireland. 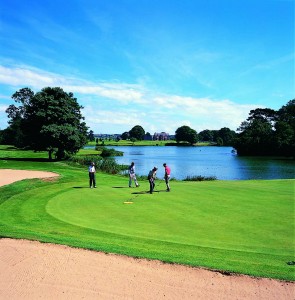 Malone is a fine golf course located near the centre of Belfast,

Malone Golf Club, Belfast: This course is set in a secluded parkland course in gently undulating countryside on the outskirts of Belfast. The layout of its 27 holes, the lake, the tree lined drive and the seasonal splendor of flowers and trees make Malone a special place to play golf.

Tandragee Golf Club: Tandragee Golf Club is situated within the historic walls of the Duke of Manchester’s estate. This well wooded parkland course is a good test of golf for any keen golf enthusiast and the course provides excellent views of the rolling Co Armagh landscape with views of the Mournes in the distance.

Ardglass Golf Club: Ardglass Golf Course is an 18 hole links course that will test even the best of golfers on a windy day. The course hugs the coastline, with no fewer than 8 holes where the Irish Sea coastline comes into play. Ardglass is really a course to savor and the Irish Sea is visible from all 18 tees and greens and on a clear day it is possible to see across the Irish Sea to the Isle of Man.

Edenmore Golf Club: Edenmore, a parkland course, is laid out in the gently rolling hills of the lower Lagan Valley. The course layout is distinct in that both nines are different in appearance and playing characteristics. The front nine is relatively open, but with the hundreds of rapidly maturing trees, this will soon not be the case. The back nine features trees over 100 years old, which have been integrated into the terrain of several holes. The greens with their subtle undulations provide a very stern test in themselves. 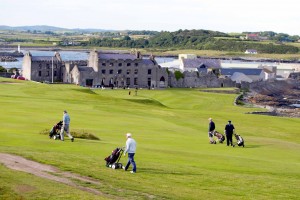 Ardglass Golf Club Situated on the south-east coast of County Down,

Lough Erne Resort, Enniskillen: Lough Erne Resort is home to two Championship Golf Courses, including The Faldo Course, designed by six time Major winner Nick Faldo. It will be no surprise that water comes into play a lot, given the spectacular setting of the golf course between Lough Erne and Castle Hume Lough.

Roe Park Resort Golf Club: The 18 hole parkland layout takes full advantage of its beautiful setting with Lough Foyle and the Inishowen Peninsula providing a dramatic backdrop to the course. Popular with amateurs and seasoned players the course is known for being both challenging and enjoyable.

Castlerock Golf Club: This golf club is situated in the seaside resort of Castlerock which lies approximately 5 miles west of Coleraine on the North Coast. Castlerock is well known for its great links course which is set among rolling sand dunes. Its scenic qualities embrace the River Bann flowing out to the Atlantic, eye-catching views of Donegal and on a clear day towards Scotland and the Isle of Islay.

Omagh Golf Club: Omagh Golf Club is a parkland course with 9 holes on either side of the main Dublin Road. A good test for both low and high handicap players, Omagh’s feature holes are the eighth, a 377m dogleg par 4 and the eleventh, a 380m par 4, which follows the River Drumragh. Extensive drainage work has enabled play virtually all the year round and ensures the fairways are in as good a condition as the excellent putting surfaces.

Newtownstewart Golf Club: Newtownstewart Golf Club, founded in 1914, lies at the foot of Bessy Bell mountain, in the rolling parkland of Baronscourt, ancestral estate of the Duke of Abercorn. Mature beech trees and wildlife such as pheasants, red squirrels and buzzards, together with views of the surrounding Sperrins make it a very popular course. The Club has held Pro Am tournaments, regularly hosts GUI qualifying events, and is a demanding test off the back boxes.


2 Responses to SUMMER OF GOLFING IN ‘FULL SWING’