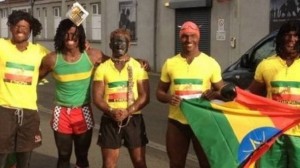 ULSTER rugby players are in the sin bin after posting a picture of themselves with their faces and bodies coloured with black makeup.

The snap – which appeared on a social media site – has forced furious Ulster Rugby chiefs to issue a public apology for their conduct.

The photo was posted on the Twitter profile of Irish international Paddy Jackson. It has now been removed.

He is pictured with two other Irish internationals, Chris Henry and Andrew Trimble, along with Ulster player Michael Allen and former Ulster player Paddy McAllister.

Paddy Jackson, Chris Henry and Andrew Trimble were members of the Ireland squad that won this year’s Six Nations Championship.

Ulster Rugby said they “apologise unreservedly for any offence”.

In a statement, the club said the photograph showed the players at an “Olympic-themed fancy dress party held two years ago”.

“It was not the intention of the players to cause upset and the photograph has since been removed.”

In a statement, the Irish Rugby Football Union said it had contacted Ulster Rugby in relation to this matter was “satisfied that they have addressed it appropriately”.

The men were dressed as members of the Ethiopian Olympic team for a fancy dress event.

Paddy Jackson made it his profile picture on Twitter recently.

Chris Henry posted a similar picture to his Twitter feed on 16 May.