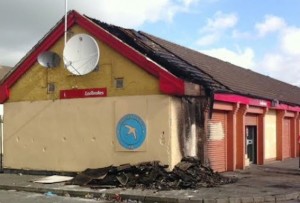 A bookmakers office has been destroyed in an overnight arson attack.

Firefighters were called to deal with the blaze at the Ladbrokes office at a shopping complex at Central Drive in Derry’s Creggan area.

Three appliances attended the incident which occurred at around 4.00am.

Kevin Lynch, local commander of the Northern Ireland Fire and Rescue Service, said he believed the blaze was started deliberately.

He said: “It would appear to have been caused by a smaller fire started at the front of the building.”

Those responsible have been condemned by Kevin Campbell, Sinn Fein councillor the for area.

He said as a result of the fire, jobs had been put at risk, 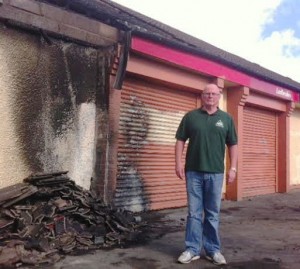 Speaking to Derry Daily at the scene, Cllr Campbell said: “This is absolutely disgraceful. The building has been gutted and as a result five jobs are at risk.

“I appeal to anyone with information to pass it on to the authorities or to myself.”


One Response to ARSON PROBE OVER BOOKIES SHOP FIRE