RUC CHIEFS COULD HAVE PREVENTED MURDER OF SGT JOE CAMPBELL 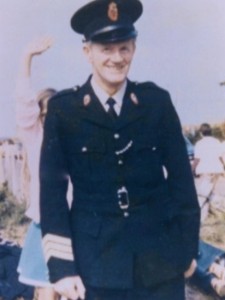 THE POLICE Ombudsman says the murder of Catholic Sgt Joe Campbell almost four decades ago could have been prevented by senior RUC officers.

Sgt Campbell, a father-of-eight, was shot dead as he closed Cushendall RUC station in County Antrim in 1977.

But he said he did not believe the RUC colluded in the murder.

In his report, published on Friday, he said senior RUC officers failed to act on warnings from junior officers concerning a specific threat against Sgt Campbell, made long before he was murdered.

“We note the comments made by the Police Ombudsman and acknowledge his findings around the investigation into Mr Campbell’s death in 1977.

“On behalf of the Police Service of Northern Ireland I wish to express my profound regret at the loss of a highly esteemed colleague in such tragic circumstances and extend our sincere sympathies to his family.

“The Ombudsman report makes difficult reading. It is clear there were significant shortcomings in the RUC handling of information prior to the murder and in both subsequent police investigations into Sgt Campbell’s murder. And for that, I am truly sorry.

“Policing back in 1977 operated in a very different context. The RUC’s 2strength as at 31 December 1976 was 5,253 police officers with the service investigating 112 troubles related murders the following year (1977). Furthermore, intelligence handling, training and investigative standards for detectives, forensic opportunities and family liaison processes were very different to those rightly expected today.

“None of this seeks to excuse any inadequacies or failings in the actions of the RUC. It is simply to place them in the wider context of the time.

“Policing has developed enormously over the past thirty five years. With the advent of the Human Rights Act 1998 and other related legislation, PSNI now have greatly improved policies and procedures which guide our response to potential threats and how we approach criminal investigations, compliant with the European Convention on Human Rights.

“It is however, disappointing to note that a number of retired officers felt unable to engage with this Police Ombudsman’s investigation. Although some may have sadly died or are in poor health, the information and assistance from those capable of giving it may have provided a clearer understanding and insight into the events of 25th February 1977.

“Finally, one of the key functions of any police service is to bring to account those responsible for such a terrible crime. It is a deep regret that in this case that has not yet been achieved.

“Today, with the publication of the Police Ombudsman’s report, details of this murder are fresh in people’s minds, I would make a renewed appeal for the people who know who did this to come forward to us with information.”