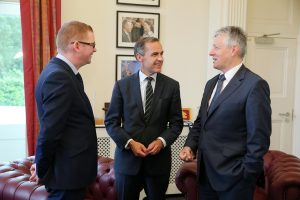 First Minister Peter Robinson (r) and Finance Minister Simon Hamilton (l) are pictured with Mark Carney, Governor of the Bank of England after their meeting at Stormont Castle in Belfast this afternoon.

FIRST Minister Peter Robinson and Finance Minister Simon Hamilton today met Mark Carney, Governor of the Bank of England to discuss the current economic and financial conditions and how they impact on people in Northern Ireland.

The Ministers had a wide-ranging discussion with Mark Carney and covered issues including the local housing market, interest rates, business lending and the local banking sector.

Commenting after the meeting the First Minister said: “I welcomed the opportunity to meet with Governor Carney to ensure the issues affecting people in Northern Ireland are given full consideration when the Bank Of England is making decisions impacting on the entire United Kingdom.

“The local economy was particularly impacted by the recession with it experiencing a deeper and more prolonged downturn compared to the overall economy as a whole. A range of economic indicators suggest the local economy is now gaining positive momentum. This includes economic activity expanding, the number of jobs increasing, while the number of people claiming unemployment benefits has been falling.

“Access to finance has been a major concern for some time, but there are encouraging signs the lending environment here is beginning to improve.

“The Finance and Enterprise Ministers meet regularly with our local banks who tell us they are very much open for business and have money to lend. The economy remains the Executive’s key target and so we must ensure the necessary access to finance is in place to enable businesses to perform.”

Finance Minister Simon Hamilton MLA said: “The structure of the banking sector in Northern Ireland has in the past limited the effectiveness of the initiatives taken nationally by both the Bank of England and the Government to encourage the banks to increase lending.

“The Government recognises this and I have been working through the Joint Ministerial Taskforce on Banking to examine how we can improve the support that is on offer.

“Today’s meeting with Mark Carney was a useful opportunity to highlight the challenges facing our banking sector so that Northern Ireland’s unique circumstances are taken into account in the design and implementation of such initiatives going forward.”