‘BUTTER-FLY’ TO SCOTLAND FOR A MUSICAL SUMMER 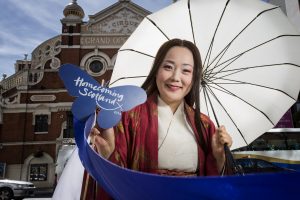 MADAMA Butterfly, Hye-Youn Lee, strikes up the band and encourages all culture lovers to fly to Scotland for a musical summer, as she performs with the Scottish Opera at the Grand Opera House, Belfast.

The leading opera singer believes, with Scotland’s rich creative landscape is firmly in the spotlight this year, there has never been a better time for Northern Ireland visitors to visit Scotland and soak up the thriving cultural scene.

Highlights include: Nicola Benedetti MBE leading the Classical Music Marathon Day in Glasgow (26th July 2014), the Celtic Hebridean Festival in Stornoway (16-19 July 2014), a Festival of traditional and contemporary music on the Isle of Lewis, the Wickerman Festival (Friday 25 & Saturday 26 July 2014).