A SENIOR detective has issued advice to members of the public to report suspicious activity at ATMs.

In all three incidents, gas ignition may have been used to remove the ATM.

“Our advice to the public is to avoid any ATM that appears to have been tampered with and, in particular, do not approach any which has hoses, wires or other items leading from it. Call the police immediately on 999.” 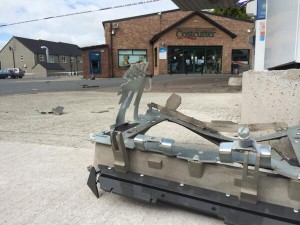 A number of arrests have been made in relation to the incidents in Carrickmore and Hamiltonsbawn. Two men have appeared in court on charges linked to the Hamiltonsbawn incident. Police enquiries are continuing.