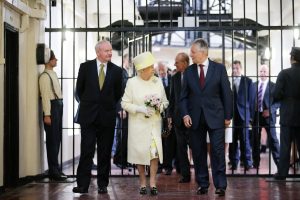 First Minister Peter Robinson and deputy First Minister Martin McGuinness with Her Majesty The Queen and His Royal Highness The Duke of Edinburgh during their visit to Crumlin Road Gaol, Belfast.on Tuesday
Picture by Kelvin Boyes / Press Eye.

ON her third and final visit to Northern Ireland, the Queen and the Duke of Edinburgh are to meet Antiques Roadshow experts as they round off a series of engagements.

The Royal couple will meet presenter Fiona Bruce and the BBC team for filming at Hillsborough Castle during a private engagement.

Later, the Queen and Prince Philip will travel to Coleraine for a World War One commemoration.

People dressed in period costume from 100 years ago will be among those greeting the Queen and the Duke of Edinburgh at the Royal British Legion event.


One Response to QUEEN TO MEET ANTIQUES ROADSHOW HOSTS