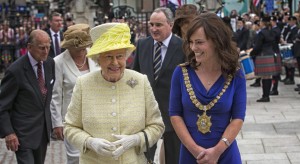 THE Queen and Prince Philip have visited Belfast City Hall at lunchtime today.

They were greeted by Belfast’s new Lord Mayor Nicola Mallon as scores of well wishers looked on.

The Royal Couple later sat down to a banquet lunch in the City Hall where the Queen said Northern Ireland had come along way in recent years.

Earlier the Queen and Prince Philip visited the set of Game of Thrones and met members of the cast.