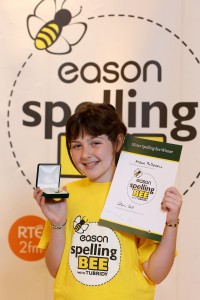 Amelia will go on to represent the province at the Eason Spelling Bee All-Ireland Final in RTÉ later this week.

The Eason Spelling Bee is part of an overall Eason literacy and reading initiative that aims to inspire children to develop a greater appreciation of words in a fun and educational way, and to encourage them to perfect their spelling and pronunciation skills.

Amelia will go head to head against contestants from all four provinces to compete for the title of the Eason All-Ireland Spelling Bee Champion 2014 and have the chance of winning €7,500 worth of library books for her school. Over 1,000 schools from across the island of Ireland have competed in this year’s contest.

Amelia started her Spelling Bee journey in May this year as a representative of her school and rose through the Antrim County Bee taking the top prize on the day.

She then made her way to the Ulster Final held in the Eason flagship store in Donegall Place, Belfast where she competed against 31 county bee winners to take the title for the province.

The next and final stop will be the Grand Final in RTÉ, where the All-Ireland Champion will be crowned live on RTÉ 2fm’s Tubridy.

The Eason Spelling Bee, in association with RTÉ 2FM’s Tubridy, is now in its fourth year and is the ultimate spelling contest, with all four provincial finals and the All-Ireland Final to be broadcast live on 2fm’s Tubridy.

Speaking at the Ulster Spelling Bee, RTÉ 2fm’s Ryan Tubridy said: “A massive congratulations to Amelia for earning her place at the Grand Final. This is the fourth year we have packed up our bags and travelled across the island of Ireland to see the best and brightest young people challenge themselves to an incredibly high level. The sheer standard of the contestants in Ulster has amazed us and we would like to wish them all the very best at the final.”

Also speaking at the Ulster final, Catherine Cahill, Brand Manager at Eason said: “Amelia has earned her place in the All-Ireland Final and has already achieved her rightful place as Ulster’s top speller. We’ve experienced an electrifying welcome here in Belfast and the spirit of both the local communities and all the schools taking part has been fantastic. After six months of Spelling Bees happening across the island of Ireland, it’s exciting to think we will crown our All-Ireland champion with a matter of days at the Grand Final this Friday.”