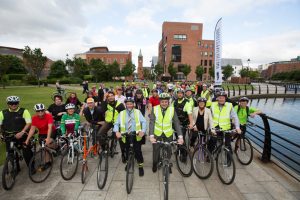 Starting at 8am, the Minister and members of the Department’s Cycling Unit gathered at the Gasworks for their traditional Bike Week run.

They were joined by other commuters and participants in the ‘Ride on Belfast’ event, organised as part of the Fred Festival.

They cycled en masse to Belfast City Hall where they were welcomed by new Lord Mayor, Nichola Mallon and rewarded with a well-deserved cycling breakfast.

Bike To Work Day is one of many cycling events taking place during Bike Week (14 – 22 June) and is promoted by the Cycling Unit.

The aim of the initiative is to highlight the numerous health, financial and environmental benefits associated with cycling and encourage as many people as possible to get involved.

Danny Kennedy congratulated those involved, saying, “There has been a great turn-out of cyclists for the event today and it is heartening to note so many commuters taking part in my ‘Cycling Revolution’ which I announced earlier in the year.

“I have tasked my Department’s Cycling Unit to develop a clear and aspirational vision for cycling, which will give an increased focus and priority to the needs of cyclists.

“We all have a role to play in creating a more sustainable society and by embracing alternative modes of travel we can make a real difference to our environment.

“Cycling is a healthy, low-cost and, for so many journeys, the sensible way to travel.

“Bike to Work Day is the perfect opportunity for regular cycling commuters and new cyclists to come together to enjoy the benefits of cycling.”

Belfast Lord Mayor, Councillor Nichola Mallon, said: “I am delighted to be involved in this initiative and to encourage more people to cycle.

“This is a great way to keep fit, reduce carbon emissions and save money. Belfast City Council is a big supporter of Bike Week.”