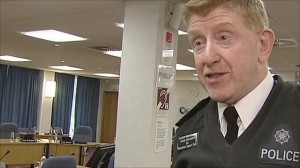 FORMER PSNI ACC Duncan McCausland has been released this evening from police custody.

He was released just before 9 pm this evening and a file is being sent to the Public Proseuction Service for consideration.

Detectives have this evening been granted varying periods of additional time to continue to question four other men arrested on Tuesday in Northern Ireland and England.