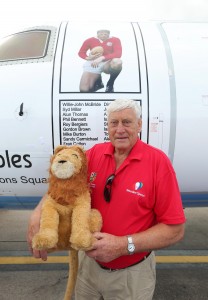 FLYBE, the largest airline operating out of George Best Belfast City Airport has paid a unique tribute to the 1974 British and Irish Lions Squad.

“The Invincibles”, a specially named Q400 aircraft, has been unveiled in the presence of the squad members including team captain Willie-John McBride, by Fred Kochak, Flybe Routes Director accompanied by Andrea Hayes, Flybe’s Regional Manager North.

Fred Kochak explains, “In May 1974 a squad of 34 rugby players from Ireland, Scotland, England and Wales formed the British and Irish Lions Squad to travel to South Africa. They were to play against a country not beaten in 78 years. When they returned in July 1974, having won 21 of their 22 matches and drawing the other, they returned as “The Invincibles” and are widely regarded as the greatest northern hemisphere side of all time. Their passion, commitment and determination is legendary and we are delighted to make our own unique tribute to what they achieved and the values they continue to represent. 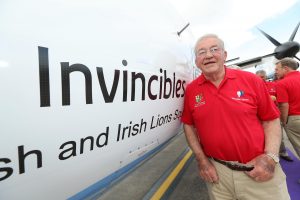 Syd Millar with the new Flybe plane ‘The Invincibles’.

Dedicating an aircraft to such sporting icons is our special way of saying congratulations and a thank you to “The Invincibles”. As she flies across the Flybe route network, we hope that “The Invincibles” will act as an inspiration to others”.

From today the Flybe Q400 OE will feature a life size image of Willie-John McBride framed within a set of rugby posts. Below the cross bar are listed the 34 names of the full 1974 British and Irish Lions Squad. Alongside the image is the new name of the aircraft, “The Invincibles”.

Adds Mr Kochak, “The Invincibles celebrate their 40th anniversary today and Flybe recently marked its 30th year operating out of George Belfast Belfast City Airport. Two very different milestones but both demonstrating a strong legacy of achievement and commitment which is assured well into the future, both here and throughout the rest of the UK.”


One Response to FLYBE UNVEILS ‘THE INVINCIBLES’