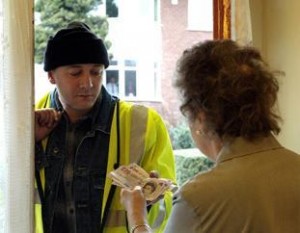 FOUR people men have been charged over a PSNI probe into the targeting of elderly people’s homes by crooks across Northern Ireland.

On Monday five people were arrested at The Close area in Holywood, Co Down as part of the operation.

Two men – aged 49 and 21 – have been charged with a number of offences including fraud and conspiracy to burgle.

Another 21 year old man has been charged with two counts of burglary.

All three men are due to appear at Belfast Magistrates Court on the morning of Wednesday 18 June.

A 23 year old woman has been charged with fraud and is due to appear at Newtownards Magistrates Court on the morning of Wednesday 18 June.

A 16 year old male who was also arrested has been released on police bail pending further enquiries.