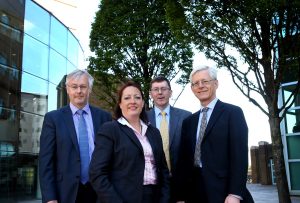 During his remarks Dr Weale outlined the factors he believes are most important for assessing inflationary pressure in the economy.

Dr Weale focussed on two areas of the economy where inflationary pressure can build and which Monetary Policy Committee action can influence.

First, pressures within firms, affecting how they set prices. Secondly – and more important in Weale’s view – pressures in the labour market, which affect wage growth.

Combining this analysis of wage pressures with the projections in the Bank’s Inflation Report, Dr Weale noted that falling unemployment and recovering productivity should result in wage growth picking up to around 4 per cent per annum.

Turning to the policy decision the MPC faces, Dr Weale said that it is becoming more balanced, with two opposing forces of uncertain magnitude pushing in different directions.

On one side, existing measures of underemployment may be overstating the underlying amount of spare capacity in the labour market.

Dr Weale said: “One factor is that people who have been recently unemployed are less productive than average.

If this is the case, then as the economy continues to grow, unemployment could fall more quickly than the MPC expects.

That on its own certainly points to a need for a policy profile tighter than in our May forecast.”

“The Northern Ireland economy is currently enjoying a cyclical upswing, supported by the “rising tide” effect from the GB economy and signs of recovery in ROI with leading indicators reinforcing relatively positive short-term prospects in general for both business and consumers. However, with the resumption of UK fiscal austerity measures and a tightening in monetary conditions on the horizon, the outlook for the regional economy becomes a little cloudier post-general election with some risk of another mini-business cycle in the UK. Strategically, it remains unclear from current policies how deep-seated structural challenges in the local economy are to be addressed which, in time, might help close the gap in incomes with other regions”.

“Today’s event comes at a critical time for business in Northern Ireland. The nascent economic recovery is beginning to take hold across many sectors and, while the headwinds remain strong, there is an undoubted level of confidence locally which hasn’t been seen for many years. Yet again, we were delighted to have experts in Dr Weale and Alan Bridle detail the forecasts locally, nationally and internationally and we very much hope that their upbeat remarks bear fruit over the coming 12 months”.


One Response to CBI PROVIDES ECONOMIC OUTLOOK FOR YEAR AHEAD