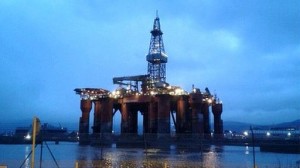 The Blackdolphin oil rig lit up at night in Belfast

THE massive Blackford Dolphin oil rig has left the Harland and Wolff shipyard in east Belfast.

The rig initially came in for a 60-day refit last November, but was found to need much more extensive repair work.

About 600 workers have been employed on the project – about 400 of them brought in from outside Northern Ireland.

On Tuesday, it began its journey to the North Sea where owners Dolphin Drilling will put it back into service.