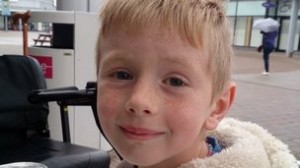 POLICE have named the seven-year-old boy who tragically died after being found at the bottom of cliffs in Ballycastle as Logan Crawford.

The primary school pupil was a native of the Co Antrim town.

Logan was missing for at least an hour on Sunday evening.

He is believed to have been playing with friends near a holiday park when he fell from the cliffs.

The alarm was raised on Sunday night and the search for the seven-year-old involved the RNLI, Coastguard and a Royal Navy helicopter.

Logan was taken to the Causeway Hospital by helicopter, but died.

The boy’s school principal said Logan’s death had left “a void that will never be filled”.

Diana Evans, of Ballycastle Integrated Primary School, said: “He was a wonderful wee boy with a real zest for life.

“He was one of the most well-mannered, polite little boys I have ever taught.

“Everyone loved him because he was a real character and such a joy to be around.”

Adding that the school had fond memories of Logan, she added: “He always took great pride in his hair and it brought a smile to my face every day I saw him walking though the dining room doors with his wonderful hairstyles.

“He was just one of those little boys who holds a special place in your heart.

“On behalf of the school and the board of governors, we would like to extend our sincerest sympathies to the family circle at this very sad time.

“There will be support provided for pupils and staff over the next few weeks and into the foreseeable future.”

In a statement, the North Eastern Education and Library Board said: “The board deeply regrets the very sad and tragic death of seven-year-old Logan Crawford, who was a pupil at Ballycastle Integrated Primary School.

“Our thoughts and prayers are extended to the family circle at this very sad time.

“The board’s critical incident team are in place at the school, providing counselling support to pupils and staff.”

A special assembly took place in school earlier today in memory of Logan.