COMPLETION OF ADDITIONAL CYCLE FACILITIES AT CAIRNSHILL PARK AND RIDE 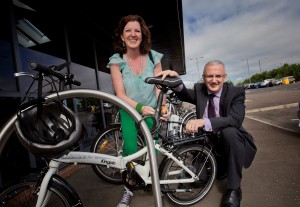 Additional bike parking slots, lockers and changing facilities are now available for cyclists at the Park and Ride.

The announcement was made during Bike Week 2014 and is part of a programme by the Department for Regional Development to make cycling more accessible and attractive to the public.

“This scheme will give people the option of cycling to the park and ride facility before taking the bus or parking their car and cycling into the city centre using the available bus lanes.

“Cycling is a healthy, cost effective and environmentally friendly mode of transport so it is important that we make it as accessible as possible to the general public.

“I am committed to creating a cycling revolution in Northern Ireland and my Department will continue to focus on the needs of cyclists and improve infrastructure to encourage greater participation in cycling as a means of transport.”

People across Northern Ireland are being urged to get on their bikes this week to discover the benefits of cycling as part of Bike Week 2014 which is running until 22 June.

An action-packed programme of events is taking place across Northern Ireland including a Cycle Ride and BBQ in Coleraine on 18 June and an adult bike training programme in local community centres in Fermanagh until 22 June, to name a few.